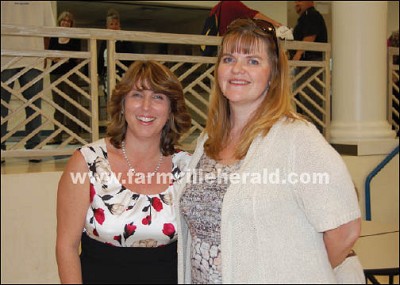 “I am honored and humbled to be selected to lead the division,” expressed Dr. Griffin after the announcement was made, “to lead our division and each other to teach our students to think critically and to problem-solve and to collaborate so that they can be competitive in a global society…”

According to School Board Chair Dr. Christine Ross, the Board wanted to make the announcement to the school's faculty and staff before holding its called meeting later in the afternoon.

“We really felt this was important to come to employees before it went…anyplace else,” she said. “That's why we called the meeting first.”

Dr. Griffin has served as “acting superintendent” since July 1.

The School Board took on the superintendent search this summer.

“It was determined at that time that we wanted to do a full superintendent search because we wanted to make sure that we hired the absolute best person that we could possibly find,” Dr. Ross said about the interview process.

According to Dr. Ross, the School Board has three main goals-overseeing the budget, implementing policy, and locating and hiring a superintendent.

“…It doesn't happen all the time, as a Board member, that you have that opportunity arise,” noted Dr. Ross about the search process. “As we discussed it and began figuring out how we were going to move forward when Dr. Thornton gave us his resignation, it was determined at that point that we really needed to do a full-superintendent search. We wanted to make sure that we hired the absolute best person we could find for Cumberland County Schools…”

The School Board conducted interviews throughout the summer and found its top four candidates.

“We came up with four individuals and all four were impeccable and I have no doubt they will be phenomenal superintendents in any school system,” said Dr. Ross.

The Virginia School Board Association's (VSBA) process would have taken months to complete and was estimated to cost approximately “three times more than it actually cost” the Board to do the search, said Dr. Ross

The candidate pool included “some who are extremely well-known and respected within the field of education,” she advised.

The School Board also began the process by requesting feedback on a survey.

“We broke it apart to see what the data said,” she said about that information received.

During the final meeting, the Board decided to do a silent ballot before discussions began on the final four candidates after School Board member George Reid Jr. raised the idea.

“Ms. Seal came up with putting individuals' initials on the paper and everyone had to circle the initials and, lo and behold, it was unanimous. We all picked the same person, which I was really kind of shocked but it was a good shock,” she said.

According to the Board, Dr. Griffin has “devotion to the duties” she serves and “improves school culture.”

One point that came out “loud and clear” from the Board and from the survey was that the community wanted the new superintendent to live within the county.

During the meeting, Dr. Ross addressed the fact that the Board had received comments from individuals related to the search process.

“I even received a letter in my mailbox saying that this was an absolute disrespect to Dr. Griffin,” said Dr. Ross. “After the fact, I told Dr. Griffin about the…letter and I would disagree with that. I think, if anything, we were trying to be as respectful as possible to anyone who was going to apply for the position because I don't want anyone in this room, including Dr. Griffin, to think that she got the position because it was the easiest thing to do or that it was easy to just pick someone who was already here. It was actually extremely difficult to do an external search because we all really like Amy very much.”

Dr. Griffin “outshined” everyone, she continued.

“That was another good reason to do the search…and we had a good candidate pool and Dr. Griffin was the best we could find,” she said.

After the announcement was made Dr. Griffin took time to speak to her faculty and staff at the division-wide meeting.

“I am very honored and I'd like to take the time to thank all of you for all of your support and words of encouragement…,” she said.

Dr. Griffin also commended the School Board on conducting its own selection because of the cost-savings to the division.

Dr. Griffin's family was present for the announcement.

“He puts up with me at home and he has to be patient,” she said about her husband, Steve. “I work all day and then I go home and work some more. I am a workaholic…”

Dr. Griffin and her husband will be relocating to Cumberland County this fall.

She also has a son, Ryan, who is a fifth year architect student at Virginia Tech.

The Board's official announcement came later on Friday at a 5 p.m. called meeting.

At that meeting, the Board unanimously approved the appointment of Dr. Griffin as superintendent of the school system.

Dr. Griffin has worked in Cumberland County Schools for eight years and has been in public education for 21 years.

She earned her Bachelor of Science in Elementary Education and a Master's Degree in Curriculum and Instruction and an endorsement in Administration and Supervision from Longwood University.

She later earned her doctoral degree in Education Leadership and Policy Studies from Virginia Tech.

She believes it is time to move from “minimum standards to a more rigorous curriculum where students obtain 21st Century learning skills and become lifelong learners,” according to a press release from the school system.