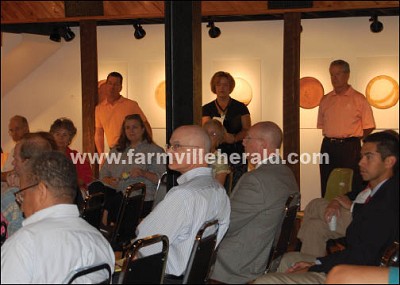 FARMVILLE – Caryn Kayton has been a Main Street entrepreneur for nearly three decades. She's been to many meetings with a lot of people. Monday morning topped the charts.

Ideas flashed like lightning during a two-hour brainstorming session hosted by the Farmville Area Chamber of Commerce to address downtown revitalization.

And there was thunderous support to move forward with a community committee to develop the best plan of action for downtown Farmville.

“I thought it was a great meeting,” Ms. Kayton enthused afterwards. “I'd say this was the most powerful group of people” assembled to discuss the downtown business issue.

“I've been to every meeting that ever was about these things,” she said. “I would like to see something happen.”

And she is not alone.

“Lots of good things were churning. Now we've got to focus it,” said chamber vice-chair Rucker Snead in an interview after the roundtable discussion. “We're pretty excited.”

Representatives from the Town of Farmville, the chamber of commerce, Hampden-Sydney College and Longwood University joined business people at j fergeson gallery.

“It was an eclectic, wide-ranging discussion,” Snead said of the meeting attended by 27 people.

The key outcome, Snead continued, is the “definite agreement” that a community committee-not a Town of Farmville committee or a chamber committee-take shape.

“There's great interest in that and that's the next step,” said Snead, who said he will be H-SC's representative on the committee.

Snead noted, too, that the group's resolve for a community committee was on track with Town Council's decision last week to appoint two of its members, Ward B's Sally Thompson and At-Large council member Tommy Pairet, to just such a community-based committee.

“I'm very excited that there is a group formed,” Pairet said Monday after attending the chamber's roundtable discussion, adding that he looks forward to hearing from anyone “with fresh new ideas, or any ideas.”

Pairet, also a Main Street merchant, believes it is vital to the town's interest for the downtown business economy to be successful. “We've got to get something going,” he said, repeating his willingness to listen to “any and all suggestions from anybody…Everybody ought to have an opinion.”

One of the committee's agenda items will be to visit other towns, such as Lexington or Staunton, that have very successfully revitalized their own downtown.

“And see what works,” Snead said. “Let's go visit some folks and see how they did it, who they pulled together.”

The committee will also include at least one college student and students at H-SC and LU are expected to be surveyed as part of the downtown revitalization effort. There are thousands of college students in the Farmville area, several thousand living within blocks of Main Street, yet relatively few students regularly shop downtown.

Attracting those students as customers is regarded as a key component of any action plan rolled out by the committee.

“That will probably be the next major step…We don't want to wait too long to have the next meeting,” she said, noting the need to determine full committee membership and leadership.

Monday's meeting, meanwhile, lived up to the chamber's hopes.

“I think it was very positive, with lots of ideas,” Ms. Whitus said. “We're taking a huge step and advocating for some downtown economic development.”

With “open minds,” she said, “we can all work together. We're going to move forward and hopefully make things happen.”

And she applauded the chamber of commerce for bringing “the parties together.”

Ms. McGuire, who attended Monday's roundtable discussion, said, “I'm enthusiastic about it…The more people you have at the table…the more successful you can be.”