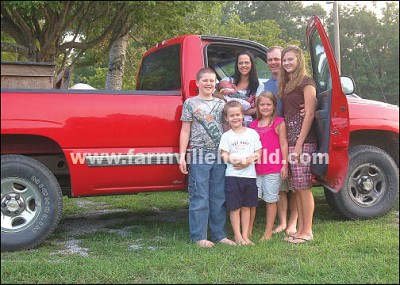 PRINCE EDWARD – Melvin and Sandra Shelton live along a gravel road near the Charlotte County line.

With the nearest outpost a couple of miles away in the form of a country store, it's about as close to the middle of nowhere as one can find these days.

But, while this particular story is about family, it is a tale that begins in the early morning hours of August 7 and will be told for years to come at annual birthday celebrations involving that aforementioned truck, a frantic driver, a surprisingly calm mother, and a fifth child.

“I…got up after the movie was over (Friday night) with and just…did a few things around the house…I ended up going to bed about 2:30 because a couple of days before that I had been getting up every hour…,” recounted Sandra with a laugh, fresh home from the hospital. “So I knew I wasn't going to be able to sleep all that well so I didn't try to get to bed early. And then about…I think it was about 20 after four, I felt something pop and I had a really sharp pain. And I was asleep. So I woke up saying 'Ow' and then…that's when he (her husband) woke up.”

Sandra was now some 38 weeks along in her pregnancy. She'd had pre-term labor and just the weekend before they had gone to the hospital in Lynchburg, only to be sent home.

It just wasn't time then, but the alarm was in the midst of going off now. Two minutes after being awakened, Sandra had another pain.

“And so I knew we'd better get to the hospital,” Sandra can laughs again.

So the couple got up and got ready to go, cluing in Nichole.

“…By the time I got out of the door, that's when…the baby had moved down and that's when the water came gushing and the pains were really bad after that,” Sandra said.

Yep, little Kathryn Bess (or Kate, as they'll call her) was now really on her way.

“Actually, I thought it was a dream,” Sandra said. “Yeah, until the pain came…and then I knew it was something that was serious.”

Melvin helped his wife into the truck. As they made their way north on the winding back roads toward Farmville, he called 911 on his cell phone and worked out plans to meet the rescue squad at Lowe's.

He didn't feel like they were going to make it, he says.

It's actually a fast-paced minutes from there. Mom-to-be is in pain. Dad is praying, dialing 911, and driving about 75 miles an hour.

Melvin and Sandra are members of Trinity Mennonite Church in Prospect. They are originally from the Crewe area-he graduated from Central and his wife from Brunswick-and they have lived here about two years. Sandra, with her hands full, also home schools the children.

If you're wondering what got them to this night, Sandra experienced pre-term labor on several occasions, including at 31-weeks where she almost delivered the child early, but doctors were able to stop the labor with medication.

On Friday evening, August 6, she was having what she thought was pre-term labor again, coming about six minutes apart. Sandra has had them six minutes apart in the past and had been sent home. The hospital had told her just the previous weekend to come when they were four minutes apart.

“So I was holding on,” Sandra picks up the story on the frantic ride. “And then I felt the need to push and so I actually told him I was gonna push and he didn't hear me.”

“He didn't know that,” Sandra re-enforces.

“…I'm over there crying out to God to help her. I said, 'Lord Jesus, help her. Lord, please Lord Jesus help her.' And I'm thinking to myself, I hope she's not pushing.”

A pendulum, once in motion, is difficult to stop.

After pushing twice, Sandra told Melvin she needed his help.

“I pulled over at Darlington Heights Road… right off Abilene…pulled over and cut my flashers on. And I got out the truck and I walked around there and when I opened the door, the baby was half way out and I was scared to death,” Melvin said.

It had its own touch of reality. Melvin realized that by comparison, he had never been scared before.

“That was just…mm. It was incredible,” he said.

Plans to meet the rescue squad at Lowe's were obviously scrapped.

Melvin called the 911 operator back and told her that there was no need to meet them at Lowe's, the baby's here.

“I wish I could talk to that lady…I was rude to her,” Melvin says with reflection.

There was some confusion over where they were when he pulled over.

Melvin explains, “…So much was going on, I didn't mean to fuss at the lady, you know….”

Perhaps, surprisingly, Sandra was the calm one, encouraging her husband, assuring him that the baby was fine. Kate's color was good, the umbilical cord wasn't where it wasn't supposed to be, and Sandra cited that the baby had made a few noises so she was getting some oxygen.

With the third push, Kate fully arrived, some 30 minutes after Sandra awoke from sleep.

With everything going on, dad was crying, dealing with mixed emotions – scared, but wondering if she were fine. Sandra reassured him.

“I was nervous, I was crying, I was shaking, but I realized, hey, I've got to do this. And the Lord give me strength to get it done,” Melvin says.

He also reflected, “If my wife had…lost her composure, I – it would have been hard, you know. But she stayed so calm that it kept me calm.”

Melvin wrapped the child up in the towel Sandra had thought to grab on the way out of the door, handed her to his wife, and shut the door. The operator on speakerphone told them that the rescue squad would meet them at Hampden-Sydney Exxon in Kingsville, a short distance from the intersection.

It would later be officially logged at 4:50 a.m. when Melvin told the 911 operator that the child had arrived.

So the couple, with the new family addition, packed into the Silverado and met with the rescue squad at the Exxon station, blessed to not have met another vehicle along the route, and then it was on to Centra Southside Community Hospital.

All the tumblers for memorable, if hectic, precious minutes, had aligned. Mom and daughter were doing OK.

Sandra thinks about the ifs-things that could have happened, but didn't.

“…There's so many things that could have happened but didn't and we know that the Lord's hand was in that,” Sandra said.

As odd as it may seem, it's the only one of their children where Melvin did not cut the umbilical cord, but he felt like he had done his part.

Did he ever have any idea he would have to deliver his own child?

“Well, we joked about it,” Melvin said. “We were at the Lynchburg hospital last Sunday and they sent us home and when the lady told us we were going home, I said right in front of the nurse…you are sending us home, I said now she's (going to) stay there too late and I'm (going to) end up delivering this baby.”

If they had only known it would have happened between home and the hospital, they would have stayed home.

“It would have been better than being in the truck,” Sandra said.

Thank goodness for the towel, though.

“It won't the cleanest truck,” says Melvin. “I mean, it's a man's truck, you know what I mean? It won't sterile clean, it was man-clean and…that's a big difference.”

Melvin and the children went to church Sunday (congratulations were listed in the church bulletin) and stopped by Southside to visit mom and baby in the hospital.

It has been a story, of course, that has borne much retelling.

“And I've been back by Darlington Heights Road now, here, four or five times since this has happened and every time I come by there I can't help but think about it…And I'll never forget that,” Melvin said.

He cites that his wife kept herself together.

“You know I calmed down and got the job done, what I needed to do, but it was unbelievable the way you kept your composure and…I'm proud of you,” Melvin tells his wife.

Kathryn is named after two of Sandra's friends, born on Sandra's dad's birthday.

“I probably will never get rid of this truck,” Melvin said. “…This truck will rust in my yard.”