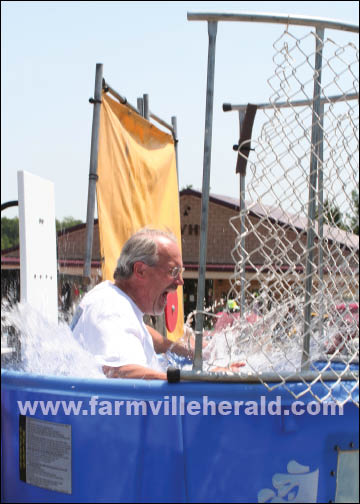 NEW CANTON – Standing in the new alcove that serves as an entrance for patients transported via emergency medical vehicles, Rod Manifold welcomed those attending the opening ceremony of the 40th anniversary celebration for the Central Virginia Community Health Center.

CVCHC is the state's first community health center. Its inception is credited to Beulah Wiley, a community advocate who knew about such facilities in other parts of the nation and was determined to bring one to her community.

He explained that the health center began in 1970 as the Central Virginia Community Health Center for Buckingham, Cumberland, and Fluvanna Counties, Incorporated. Today, it is one of 14 sites under the umbrella of Central Virginia Health Services.

Congressman Tom Perriello was the first speaker to the podium. Sharing that he is a “huge believer in community health centers,” he said the centers provide preventative and wellness care that save billions of dollars by reducing and preventing costly emergency room visits.

He stated, “This is a good thing to do morally because it provides primary care to many of those who need it the most in an affordable way. And it is also good economics for our communities.”

Perriello shared, “We are glad that we've been able to support recovery funds to help expand this center, provide a greater range of services, a greater range of hours, and also give more support through reimbursements to the community health centers around the country and certainly around central and southern Virginia.”

He continued, “We know that in our rural communities, our CHCs provide a particular boost and we're ecstatic to continue to be champions and allies for this.” Perriello added, “But the real champions are the doctors, the nurses, and the entire support team here that is a lifeline to so many of our residents in the counties in this area and around central Virginia.”

Looking into the crowd that included many CVCHC employees, he offered, “I know you put in long hours, often thankless hours, but you are literally saving lives and saving money every day. So we just appreciate everything you've done.”

Bill Hazel, Virginia's Secretary of Health and Human Resources, praised CVCHC for its service to the community and the people.

“We know in Virginia that health care is an enormous challenge for us-the cost of health care, the number of uninsured, and the strain on the budget,” stated Hazel. “Looking at facilities like this and communities like this with providers working in groups to do the right thing at the right place at the right time at the right price is so important to all of us.” He added, “I look forward to working with you over the years to strengthen this.”

Charles White, first president of the CVCHC Board, offered, “This is an emotional day for me. I remember attending the second meeting concerning the establishment of this health center.” He shared that Ms. Wiley invited him to that meeting.

Admitting that at the time he did not know exactly what Wiley envisioned, White said she was driving people back and forth to the University of Virginia for medical care. “And she thought that there should be some kind of a facility here,” said White, adding that he was sold on the idea during his first meeting.

You can find the rest of this story in The Farmville Herald.

The Sky Is Falling: What's The Wurst That Can…