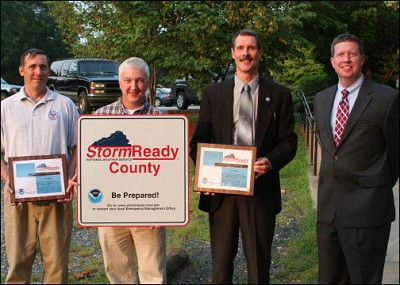 BUCKINGHAM – Representatives from the National Weather Service were on hand at the August meeting of the Board of Supervisors to congratulate the County on becoming a StormReady Community.

Phil Hysell, warning coordinator, and David Wert, meteorologist-in-charge, from the National Weather Service office in Blacksburg, presented StormReady signs to the Board in recognition of Buckingham's new status.

Hysell said the designation indicates the county's readiness and preparedness to deal with severe weather events.

According to Hysell, StormReady helps communities implement procedures to reduce potentially disastrous weather consequences. He added that the designation also helps communities be better prepared to respond to civil emergencies.

Hysell expressed his appreciation to Kevin Flippen, Buckingham's E-911 Coordinator; and, Michael Cocker, Region 3 coordinator for the Virginia Department of Emergency Management. He shared, “Without their hard work, we would not be here today.”

Hysell offered, “Of the 52 counties and independent cities that we issue watches, warnings, and forecasts for, Buckingham County is only the eighth community to achieve this important certification.”

Before presenting certificates of achievement to Flippen and Cocker, Wert offered, “The folks that we would like to give recognition to tonight have not only exceeded the expectations but have really articulated their strong desire to safeguard against the loss of life and property to the residents of this County.”

Wert concluded, “It may very well be one of the most precious things that they've done for anyone because we don't know how many lives will be saved as a result of the tremendous work that they have completely satisfied here.”

During its August 9 meeting, the Board of Supervisors resolved an issue regarding a request to locate a mobile home on property that already has one permanent residence.

With a motion by Supervisor Danny LeSueur, the Board favorably responded to an appeal on a zoning decision that denied the request. The motion drew a six-to-one vote, with Supervisor Brian Bates opposing.

The board's action authorizes the applicant to pursue a building permit to locate her mobile home on a 3.3 acre-lot owned by a relative who has agreed to the arrangement.

However, the Board attached several conditions recommended by County Administrator Rebecca Carter. Those conditions included that the temporary use be rescinded when the applicant no longer resides in the mobile home; the mobile home must be removed from the premises if the applicant is not occupying it; and, the property may not be sold as a lot with two permanent structures.

After agreeing to allow the temporary residence, the Board also rescinded action it took during its July meeting.

At that meeting, supervisors voted to override a decision of the Board of Zoning Appeals to deny a request for a zoning variance to locate the mobile home on the property. However, as County Administrator Rebecca Carter advised, such action was not within the board's authority.

During her report, Zoning Administrator Rebecca Cobb invited supervisors to meet with the Planning Commission for a work session on August 16, to review proposed changes in the zoning ordinance. The Board accepted the invitation.

Cobb also advised that the Planning Commission continued its July 26 public hearing on proposed changes to Article 9 of the Zonings Ordinance to August 23. Article 9 deals with radio, television, and wireless communication towers.

Responding to a request by Supervisor Bates, Cobb briefed the Board on a situation involving a temporary campground.

Cobb explained that after receiving a complaint about sewage not being disposed of properly, she visited the campground and took photos, which she provided to the Health Department.

In response, the Health Department visited the site and subsequently sent the property owner two notices of violation, explained Cobb.

She told supervisors that the Health Department advised the property owner to cease his operation immediately.

According to Cobb, she then reviewed the property owner's special use permit, issued in November 2008, to operate a Temporary RV Campground for construction workers at the Bear Garden Power Plant.

Cobb explained that because conditions of the SUP were not followed, the permit is null and void; and, the property owner is therefore in violation of the zoning ordinance.

Chairman Monroe Snoddy asked about other property owners who have several RVs on their land and whether they were in violation.

County Administrator Carter offered that according to the Virginia Department of Health regulations, three or more RVs constitute a campground.

As the discussion continued, Supervisor Bates stressed that the zoning regulations are necessary to protect neighboring property owners as well as those renting space on such properties.

Monday night's BOS meeting included three public hearings. However, none of the hearings drew comments from the public.

The first hearing dealt with the county's intent to file an application for funding with the USDA's Rural Development for the expansion of the wastewater treatment plant. After Chairman Snoddy closed the hearing, the Board voted to proceed with the application process.

In keeping with the county administrator's ongoing effort to update county ordinances, the next hearing dealt with a revision to the solid waste ordinance. The amendment proposed non-residential property owners be allowed to use the county's solid waste collection sites. However, to do so would require that they obtain a solid waste permit at no cost to the property owner.

Currently, the ordinance states it is unlawful for anyone other than a county resident to dispose of waste at the sites.

Expressing his opposition to the amendment, Supervisor Danny Allen said he felt users of the waste collection sites should reside in the County.

Bates offered that he understood Allen's concern but disposing of residential trash at the county sites is a privilege of those paying property taxes in the County.

Kitchen, noting he also understood Allen's concerns, said they should move forward with the amendment until they come up with something better.

Subsequently, the amendment passed on a six-to-one vote, with Allen opposing.

Following a hearing on rescinding an outdated ordinance dealing with licensing dealers of precious metals and jewels, the Board voted unanimously to rescind it.

To read the full story please see The Farmville Herald